In those early days, Andy could regularly be found dancing in the underground Jazz Funk & soul clubs of the late 70’s early 80’s including Crackers, Horseshoe, Royal- ty and The Electric Ballroom. Andy then went on to DJ at Flicks, Dartford (1986-1989 ), and also Fantasy Radio. The attraction of pirate radio was outweighed by the prospect of large fines, confiscation of recordsand the likes of, so Andy decided to follow other avenues into broadcasting.

Andy was at Jazz fm (London) for nearly 4 years, presenting several shows and becoming studio manager. In 1998. Andy then went on to joined BBC Television as Presentation Operator & Transmission controller, part of a team responsible for the output on BBC 1, BBC 2, Choice and Knowledge.

It was here he met Tony Monson who invited him to take part in Solar Radio’s Broadcasts. 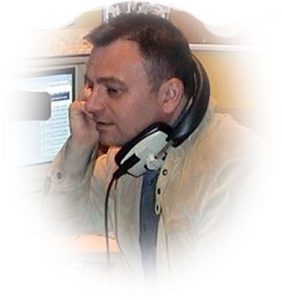 Voice-tracking and automation of shows – from Home Based Studio Presenting 5 days Breakfast Shows from his home. Andy loves the technical side of studios and is into building hardware and installing all software to enable remote desktop between PCs at home and Chalfont, Sky.

Andy today broadcasts nearly every day and organizes events for the NSPCC UK Charity, many of which are based in the beautiful Dorset town of Weymouth, right on one of the best beaches the UK has to offer.