Not only a DJ but the sole owner Of Chocolate Radio. Roger got involved with DJing back in the late 70’s early 80’s after hearing Soul and Jazz Funk being played on the then unlicensed radio stations Horizon Radio, Invicta and JFM. 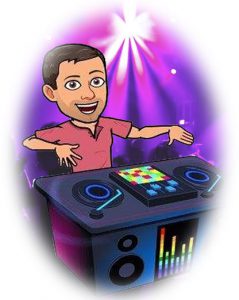 Inspired by what he heard, he got out to events in London and witnessed the legendary Froggy (Steven Howlett) in action, this truly mesmerised Roger who knew he wanted to be a DJ that could mix music, like the greats at the time (Froggy & Mastermind & others) where doing. He took up the art of mixing and over time has developed his own style of mixing which today you can hear on his Chocolate Radio shows

Roger worked as a DJ in local clubs, then join radio with shows on London’s TKO (owned and run by Louie St Clair) as Mastermix DJ. He later went on to Co-found Touch FM, which ran until the late 90’s, later going on to join Soul FM.

Times where changing in the unlicensed radio world in London, so Roger looked to the future of radio and what might happen in broadcasting. In 2009 he registered the domain name www.Chocolate-Radio.Com, thinking this might be the future of radio. This proved to be right and test transmissions where carried out.

As technology has developed, more and more radio station have started broadcasting on the net, but other commitments slowed the advancement of Chocolate Radio, which has been an R&D program for Roger.

Now with a new team of Soul, Jazz Funk, R&B, Soulful House and Reggae presenters Roger has give the station another push. Today Chocolate radio is an Internet soul radio station broadcasting globally with an audience that is building daily. Listeners today are from all four corners of the globe.

Looking back to those early days, Roger smiles and just says thank you to those people who have inspired him over the years. Tony Johns and the Radio Invicta, Horizon Radio and JFM along with the brilliant Froggy for the master mixing classes.